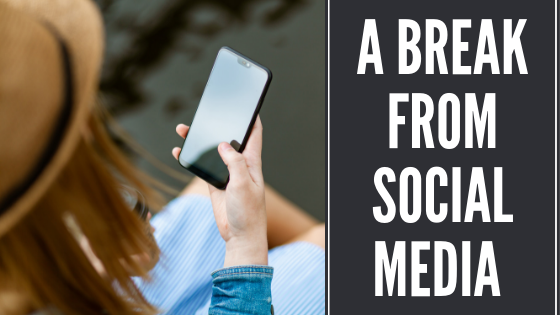 Beginning in May I decided to take a long break from social media. It had taken a toll on my anxiety and depression. I would spend hours and hours mindlessly scrolling Instagram and Facebook without a care in the world. I would compare myself to people on Twitter even if I didn’t mean to. What were they doing to get so many followers? How did they have so much engagement? There were too many moments where I was spiraling into this comparison game and it wasn’t good for me. After an incredibly horrible night, I decided that I needed to step away. I logged out of Facebook, Twitter and Instagram. I’m going to talk about three reasons why I thought it was important to take time away from social media.

Fear of missing out (FOMO)

I won’t even lie that this was one of the biggest reasons I had to step away. I felt as though all the people I followed had amazing lives. They were living in their dream cities, with their dream jobs, living their dream lives and I wasn’t doing anything that I thought was worthwhile. My life would be ten times better if I was living in another city, I thought. I would feel so much more fulfilled if I had a 9-5 job. There were so many aspects of my life that I compared to what was going on

I think one of the reasons I had (or have) such as astounding amount of FOMO is because I never felt like I was a part of a group. You know, several people that would get together from time to time to hang out. We could go out to eat or dance or see a movie or simply hang out. As I’m in my twenties and more of my friends are getting married, I began to think about who I would invite to my wedding. Did I have anyone I could?

Validation from likes and comments

This was especially true of Instagram. After posting one picture, the constant scrolling to see how many people liked my pictures. Did they leave a comment? Who liked it? Who didn’t? If this person got more likes than I did, did that make them prettier than me? Did it make them a better photographer than me? If enough people didn’t like my picture what did that say about me?

I didn’t want to admit it to myself but I wanted to feel validated by other people. I tied my self worth with the numbers of my social media accounts. How many people followed me? How many liked my pictures and posts and left comments? I wanted to be a better photographer, a better writer and just a better person and I wanted more people to tell me such. After a while it became exhausting and when the validation didn’t come in the way that I wanted, the end result was not good.

When I was still book blogging, I began it as a way for me to share my love for books and reading. Somewhere along the line, it became a comparison game. The more people who would read and engage with a review of mine, the better my numbers and the better chances I had with getting advanced reader copies of books. On Facebook and Instagram it became a concept of being prettier and skinner and just…more than what I was right now. It was not healthy at all and I had to really work to get out of this mindset.

You never truly realize how often you compare yourself to others and what it does to you mentally. The effect of social media on your mental health is a concept that has been discussed a lot but it is a conversation that never ends. There is so much room for growth especially in terms of how this changes for people of marginalized groups. Our beauty standards are based on Eurocentric standards (white, skinny) that have been pushed for us to accept as normal. It leaves our minds in a place that is not healthy.

I recently got back on all of my social media and it has been a hard adjustment. During the time that I was not online, I felt so free. Waking up in the morning, I had to train myself not to quickly open up Twitter or Instagram or Facebook. Instead, I would wake up, drink water and go about my day. Once I started to not check social media first thing in the morning, I didn’t go about my day being dragged down about not having enough comments, likes or retweets.

Leaving social media left me feeling alone and almost empty. It was almost like I was missing something in myself and coming to terms with this idea was what changed everything for me. I needed to reel back the time I spent online and come back to who I was before I became obsessed with social media.

This isn’t me saying that social media is the devil or something bad. It has introduced me to an incredible community and friends and I know that it is incredibly hard to have a life outside of social media. But this break really allowed me to understand how I deal with social media. I had to come to terms with why I had it in my life and if I wanted it still. That was the biggest change for me: I came to learn that social media wasn’t a necessity in my life but something that I wanted but how much I let it rule my life was up to me.

Have any of y’all taken time away from social media? If you did, why? What was the end result.

The Writing Diaries (3): On Writing a Re-Telling
I Love Living in Big Cities

I Love Living in Big Cities
Life Update
30 Before 30