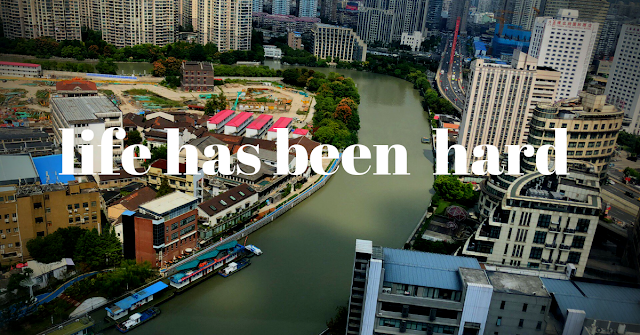 If I am being completely honesty, I don’t want to write this post. There is so much I want to write and share in this space but none of it feels “good enough.” As I mentioned in my last post, I was incredibly anxious about my big move to China. Even if I didn’t mention it in the post, I felt like it would it would be okay. I might be anxious for the first week or so and I would get over it. This was probably the worst mistake about this situation on my part and has led me here.

I have been here since September 4 and it has been an incredibly hard change. My anxiety has continuously gotten worse over the past few weeks and it has been such a rollercoaster. While there were certain aspects about the move that got better and my anxiety diminished, another aspect of the move would come to take its place. Even when I thought I was doing well, something would come and turn it upside down.

That’s where writing this post comes in. I’ve wanted to be as honest about this move as I could be but that would mean also being honest with myself. It would mean opening up and admitting that I don’t have as much control of my life as I would like to. There’s just so much about this entire move that gets me down so here are some of them.

I knew that this would not be easy to get over. I did a lot of search about what the culture would be like so I was prepared. But actually being in the mix of the culture and reading about it are two very different things. You might think you’re okay with a certain aspect but until you’re in the middle of it and feeling it, you don’t really know anything. There have been moments where I was able to be so good about not letting a moment get me down and others where a similar instance would wreck me.

2. Everything is done on your phone

This is both a blessing and a curse. I thought that I would be better about being on my phone all of the time when I moved here but surprise! They really do everything on their phone. My research told me this, yes, but I didn’t that I could literally just leave my house without my wallet and be 100% okay. Back in the US, I couldn’t do that at all. As I said, it is both a blessing and a curse.

Well, the people who told me the food here is cheap were absolutely correct but they were not correct when they said that it would be easy to find vegetarian options. I have yet to find dumplings that I can eat which has been frustrating. I can eat sea food if I choose too but they are often mixed with pork or made in beef/pork broth. This is not me bashing the culture or anything because I was fully aware of how much the Chinese love eating meat! Again, I was told that it wouldn’t be so hard to be a vegetarian so that is where a lot of my frustration is coming from.

Y’all, I didn’t think I would feel so lonely but here we are. Even when I’ve been surrounded by people, I have felt so lonely and it’s hard to combat that. I think that the difference in culture has also played a big part in how I am feeling. I like people and making friends and neither has been hard for me in the past. Yet, I am struggling here in Shanghai. I think a big part of the reason why I’ve been feeling this way has to do with my anxiety and depression so I’m not sure if there’s truly anything that can be done for it.

So, these are the top four things I am dealing with currently. As the title suggests, I am trying to push past all of these and to focus on my creative endeavors. I wasn’t going to share this next list but I felt like this post was too negative. In order to have a balance, here are some ways that I’m pushing past all of the negatives of above:

I recently downloaded a bunch of books on Libby and I’m just going to try and read them. I’m going to open whatever book I’m interested in at the moment and just read it–or not–and see how I feel. I am also going to re-read some of my favorite adult romances (Tessa Dare is my go-to when I’m down) which I know always gets me back. As you’ll see with #4, I’m going to be posting more about my thoughts on all of these books on the platforms!

I have not always been good about writing down my thoughts and I have struggled with this here in Shanghai but I am trying. At the end of the day, I want to share my thoughts on paper when I feel like I can and not force myself to do it. There’s something about taking the time to write down your thoughts with a pen that just changes things for me. Maybe it’s because destroying those words is far harder than when you type them up. One click and I can get rid of all traces of a journal entry. But for actual paper? You’d have to either rip it up or shred it and both tasks take time. I mean, even if I were to simply rip up my journal entries, I’d have to make sure the pages were small and that a person wasn’t able to read them

I am trying really hard to get back into writing and like everything else, I have to just force myself to get into it. I have decided to push all of my old stories aside and focus on something new. I don’t know what that new story idea is yet–I haven’t found a story that really makes me happy–but I’m open to finding it and writing it out.

This blog and my YouTube channel are going to be revamped and I’m going to get back to weekly posting. If there’s one thing people have told me will help me adjust, it’s really getting in tune with our hobbies and just living in that happiness. In many ways, all three of the above can be considered creating content but I wanted to differentiate between content that I’m making for myself and content I’m making for others to consume as well!

What about y’all? Have you ever moved somewhere and been unsure of your time there? Have you had to go through a rollercoaster of emotions? If so, how did you manage them? What would you recommend for me to try?